"I try to do whatever I can for the roles that I get. I'm a natural blonde, which is loopy because most of the people in my family are brunettes. My grandmum on my dad's side is a natural blonde, so I suppose that's where I get it from. But I'd dye my hair purple, if I had to. I do brunette, a lot. For Theory, I had to do brunette and that was more than welcomed on my end. They say blondes have more fun, but I'll tell you, brunettes have a bloody blast, too!".

"If I were an animal, I'd be a cat. They're fiercely independent but they still love attention on their own time. I feel like that's me. I do everything on my own, but there's times where I call up my best friend [Eva Luton] and I just whine, like 'I miss you so much, come over, lets cuddle'.

“All of us are in awe of the dramatic intensity of Louisa Demsie, the young actress who plays Vera. We had been bowled over by her performances, and were thrilled when she responded so passionately to the challenge of taking on this iconic role. She captures Vera’s joyous life force, her fierce intelligence, her determination and tenacity, her feistiness, her vulnerability, her deep emotion, her sorrow, and yet also her indomitable spirit. She IS Vera.” -Rosie Alison (producer, Tesament of Youth)
Feb 26 @ 5:11 PM

llermans said:
what projects are up next for lou?

It says on her IMDB that 'A Monster Calls' is her only film for 2016. She has 'Ex-Machina' to promote next, I think. I would assume that she's going to take a break since she's been working for so long. I also thnk she deserves it! The girl got an Oscar nom for crying outloud. Let her live! "Lou Demsie at the Vanity Fair Oscar Party. All smiles, even after losing the Oscar to Julianne Moore for Best Actress."

I WOULD BE ALL SMILES TOO IF I WENT TO THE OSCARS WITH DESMUND ROWE AND EVA LUTON!!! But good for Declan, at least he won! She seemed pretty stoked about it on Twitter. Happy for the whole cast and movie, it was so great!

okay here it is! the picture and story. sorry to keep you guys waiting but i was on vacation and i broke my phone. but luckily, i sent this picture to my mom and she had it saved for me. SO! i went to las vegas earlier this month. my boyfriend took me there for valentine's day (WOO i'm a lucky girl!) anyways, we were staying at the cosmopolitan, which is super nice and really pretty and APPARENTLY so was lou demsie. she was in the theory of everything and one of my favorite movies, like crazy! i guess she was there for her birthday. i saw her a couple times and finally got the nerve to go up to her and say hello and ask for a picture. she was really, really sweet even though she was in a rush. she seemed a bit flustered, to me, but i'm not sure why. she's gorgeous, in person. that smirk of hers is real. just look at my pictures. totally obsessed with her even more now!

but that's not the only thing! she was there with a buttload of people! i don't even know if i can name them all: eva luton, desmund rowe, spencer darvey, wells gravenor, declan mcalarney, oliver rafferty, owen dampier, zofia allyne, georgia porter, mzrhee, fucking daniel vanderlaar (WTFFF), eri archer, oh AND her ex-bf xander scoffield... i'm pretty sure there were a bunch more other people but i can't even remember right now. it was a celeb-fest and i was in heaven with everyone i saw. i didn't ask anyone else for a picture, though, because i think they were all doing their own thing. at one point, though, i did see her pretty drunk and emotional and it looked like she was ranting at someone but i couldn't see who because they went inside after smoking their cigarettes. YIKES!

all in all, it was a pretty great birthday and i thought i'd share this picture with you all. so great meeting her!

It seems like she had a wonderful, fun-filled birthday in Vegas. Good for her! As for her being drunk and emotional, well, who cares?! It's her personal life. Thanks for sharing this, though!
Feb 22 @ 2:57 PM 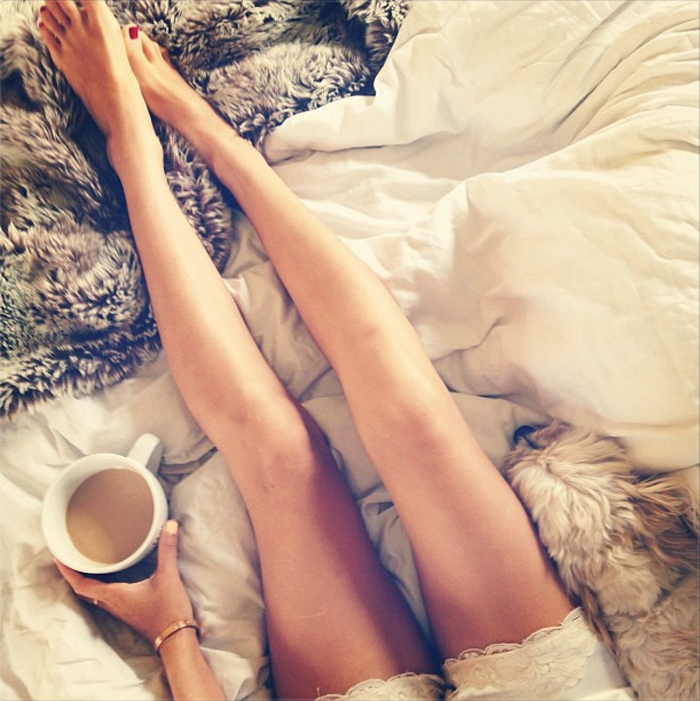 Some newer photos I snagged from Lou's instagram - @LOUDEMSIE.